In the weeks leading up to the Aug. 21 solar eclipse, numerous articles appeared questioning whether U.S. power grids could handle the expected loss of solar power.  This map from the Energy Information Administration (EIA) shows the path of the eclipse across a map of utility-scale solar generation: 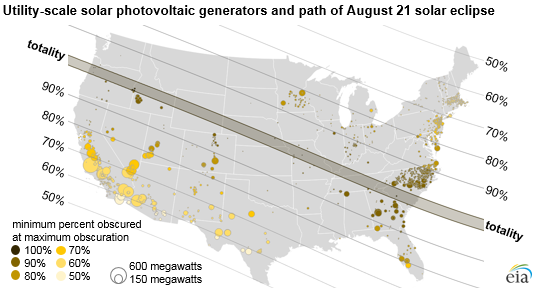 At least 10 states were expected to see significant impacts:

The results of Monday’s test indicate that the grid was more than ready to handle the event: No negative operational effects were noted. Said Eric Schmitt, CAISO vice president of operations: “We didn’t have any major challenges on the system, even minor challenges. We are very pleased about how smoothly it went … All the resources performed the way they were supposed to perform, our planning was excellent (and) the market performed well.”[1]

Let’s take a look at how California managed the loss of solar power.

The following graphs show California ISO (CAISO) renewable output for the day of the eclipse compared to the day prior:

For hour 1100, when the eclipse was at maximum, solar power on Aug. 21 was at 3,613 MW compared to 8,599 MW for the same hour the next day.  Note that this only reflects utility-scale solar power, as additional impacts from rooftop solar are hidden by the fact that the CAISO sees loss of distributed solar as additional load. (California is estimated to have 1,300 MW of rooftop solar, so we might guess an additional 500 to 700 MW was lost during the height of the eclipse.)

How CAISO Handled the Loss of Solar Power

By looking at a series of hourly charts of generation sources comparing output on Aug. 21 and Aug. 22, we can see how the CAISO compensated for reduced solar output: 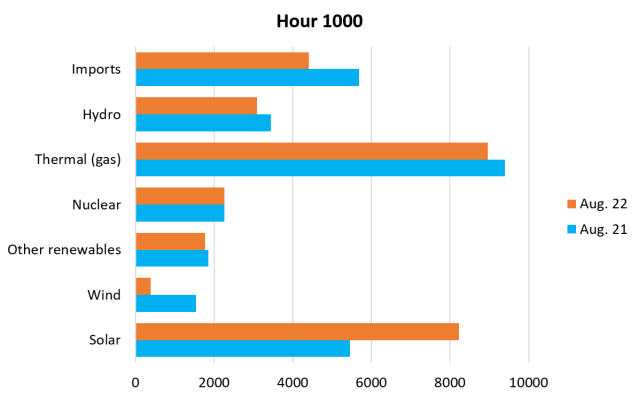 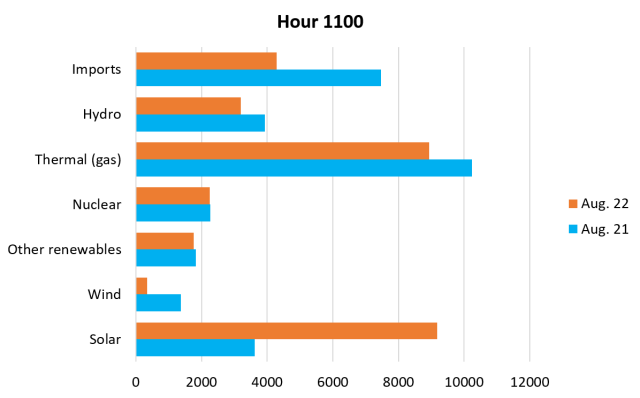 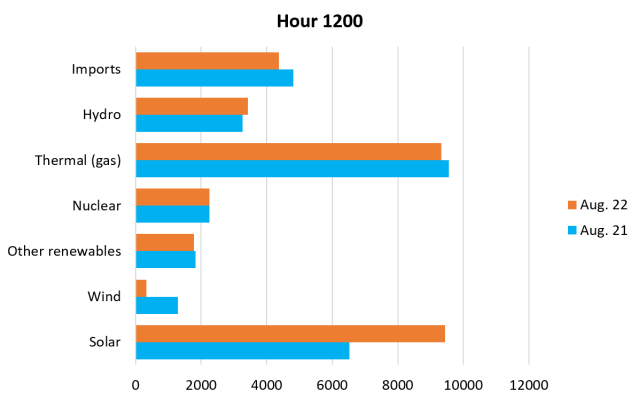 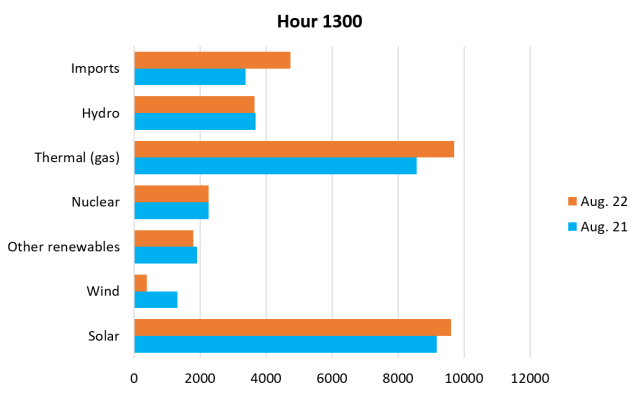 We can conclude that the multiple tools helped make the eclipse a non-event as far as the California grid was concerned. These included diversity of renewable technologies, ability to draw on power from other regions through geographical diversity, availability of fast ramp assets including hydro power and natural gas generation, and demand response. Now this was a little easier because CAISO knew the event was coming and could plan for it. Indeed, IEEE Specturm reported that CAISO held extra reserves of 800 to 1,000 MW, whereas they would normally hold about 350 MW during this time period.  But, by studying the eclipse, we can get a vision of the future of the power grid, when variable resources will not negatively impact reliability because the system operators will know how to use their various tools to keep things running smoothly.

Enerdynamics was formed in 1995 to meet the growing demand for timely, dynamic and effective business training in the gas and electric industries. Our comprehensive education programs are focused on teaching you and your employees the business of energy. And because we have a firm grasp of what's happening in our industry on both a national and international scale, we can help you make sense of a world that often makes no sense at all.
View all posts by Enerdynamics →
This entry was posted in Electricity and tagged Electric Grid, Renewable Energy. Bookmark the permalink.