Electricity Will Bypass Any Border Walls

In recent years, U.S. imports of electricity from Mexico have grown significantly, mostly through bilateral energy sales into California. As Mexico implemented its electricity market reform earlier this year, Mexican officials expressed a desire to foster enhanced cross-border trading with the U.S. to the north and with Central America to the south.

Now Mexico appears poised to become part of the California ISO (CAISO) Energy Imbalance Market (EIM), which would have generators in northern Baja California actively participating in the CAISO real-time energy market. And with future plans for integrating the Baja grid into the Mexico National System, this could further extend integration of the Western U.S. and Mexican markets. 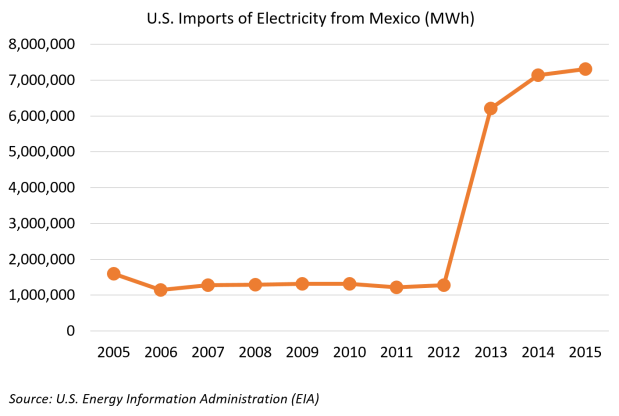 What is the EIM?

This market creates benefits including:

CAISO’s analysis shows the EIM resulted in $26.16 million of net benefit in the 3rd quarter of 2016 and has resulted in a cumulative benefit of $114.35 million since market inception in November 2014. In the third quarter of 2016, the market also allowed an additional 33,094 MWh of renewable energy to be dispatched, resulting in a reduction of 14,164 metric tons of CO2 output compared to what it would have been if the market was not in place.

Mexico’s Participation in the EIM

In October, the CAISO and the Mexico ISO, El Centro Nacional de Control de Energía (CENACE), announced the initiation of a study to explore participation of the Baja California Norte grid in the EIM. Baja, which as of 2014 has about 600 MW of renewable generation (including geothermal energy sold in a bilateral contract to the City of Los Angeles) has the potential for significantly growing renewable generation. As referenced in a recent paper by ICF International, studies have suggested that Baja could develop as much as 10,000 MW of wind generation with additional geothermal and solar resources.

But with internal demand of only a few thousand MW on a typical day, northern Baja is unable to utilize its potential resources without an external means of balancing variable renewable supply. Meanwhile, California is moving forward with implementing its 50% renewables requirement, and imports from Baja may well be a low-cost renewable source. So, we have a potential low-cost supplier sitting next door to a buyer with significant needs and an existing market mechanism that can make it happen fairly easily. Given these factors, we can conclude that despite recent negative political rhetoric about cross-border trade with Mexico, U.S. and Mexican electricity markets are going to become increasingly integrated.

Enerdynamics was formed in 1995 to meet the growing demand for timely, dynamic and effective business training in the gas and electric industries. Our comprehensive education programs are focused on teaching you and your employees the business of energy. And because we have a firm grasp of what's happening in our industry on both a national and international scale, we can help you make sense of a world that often makes no sense at all.
View all posts by Enerdynamics →
This entry was posted in Electricity and tagged CAISO, EIM, Electricity Markets, Energy Imbalance Market. Bookmark the permalink.

1 Response to Electricity Will Bypass Any Border Walls