Posted on September 30, 2016 by Enerdynamics

Prior to regulatory reforms, Mexico’s electricity was provided by the vertically integrated monopoly Comisión Federal de Electricidad (CFE) under limited oversight from the federal Secretaría de Energía de México (SENER).  In 2002, Independent Power Producers (IPPs) were allowed to build generation but could only sell to CFE.  Also in this time frame, industrial customers were allowed to acquire supply through self-supply from closely related generation entities.

Market Structure Prior to Reform

The structure resulted in multiple concerns including:

With the objectives of reducing costs and rates, fostering more clean energy, and spreading benefits among multiple stakeholders, a new market structure has emerged. Policy makers believe it will provide incentives for value creation and efficient operation, result in decision-making through competitive processes, provide open-access and non-discriminatory use of the electric system, and offer transparency. 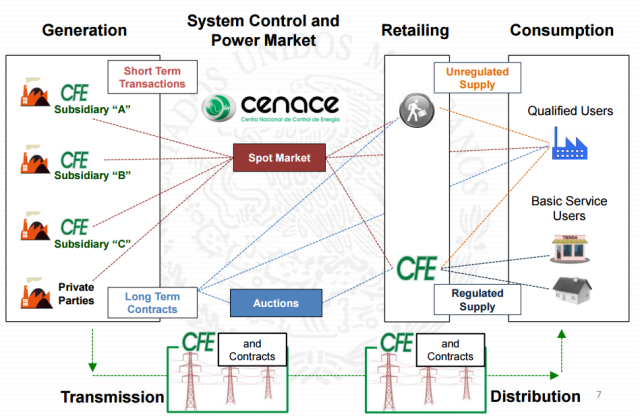 The new electric market reforms have ushered in new market players and a new market structure.

The Market Has Begun

The market has kicked off.  CENACE has been running the spot markets since January 1.  The following graphic from the U.S. Energy Information Administration shows results for the first six months of 2016: 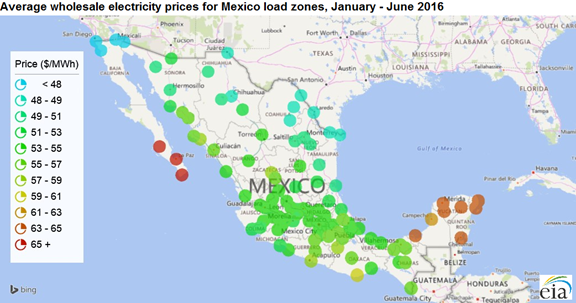 The initial long-term auction for energy, capacity, and Clean Energy Certificates was held in March with CFE as the only buyer. A second auction is planned for this fall with multiple buyers. Other aspects such as FTR auctions, the CENACE-administered capacity auction, medium-term auctions for energy, and the CENACE-administered clean energy market will be implemented over the next two years. And Mexico has ambitious plans to become a key international player in electricity markets with connections to the U.S. and Central America. Indeed, Mexico has indicated an interest in direct participation in the California ISO (CAISO) real-time Energy Imbalance Market (EIM). There certainly will be numerous interesting developments to discuss in future blog posts as Mexico’s new electric market evolves.

Enerdynamics was formed in 1995 to meet the growing demand for timely, dynamic and effective business training in the gas and electric industries. Our comprehensive education programs are focused on teaching you and your employees the business of energy. And because we have a firm grasp of what's happening in our industry on both a national and international scale, we can help you make sense of a world that often makes no sense at all.
View all posts by Enerdynamics →
This entry was posted in Electricity and tagged Electric Deregulation, Electric Markets, Mexico Electricity Market. Bookmark the permalink.