Posted on December 8, 2016 by Enerdynamics

In his 2014 book The Zero Marginal Cost Society, futurist Jeremy Rifkin states his view that  “the emerging Internet of Things is speeding us to an era of nearly free goods and services.”[1]

Specifically, Rifkin describes how once initial capital costs are spent, more and more goods and services have almost no marginal cost[2] to produce. An example is the music industry where digital versions of songs, once recorded, have virtually zero marginal cost to provide copies to consumers. In a recent talk in Chicago, Rifkin described his views on how this applies to the energy industry. These were summarized as follows by the Energy Times[3]:

“The Third Industrial Revolution will see a decline in massive vertical power structures in favor of a horizontal, distributed model. Economies will move from a seller-buyer model to a provider-user model. More and more industries – just like the music and entertainment industries have already experienced – will make the shift to operating off of very low margins of very high traffic.

The same will hold true for energy companies. In this highly distributed model almost every community, no matter the size, will be generating it’s [sic] own power off of solar and wind. Energy will become amazingly cheap, and energy companies will make their money through partnerships with their customers and clients to manage those distributed networks.”

Certainly, the energy world is becoming familiar with the concept of low marginal costs.  Advances in the natural gas industry including horizontal drilling and hydraulic fracturing have resulted in a natural gas resource with very low marginal cost that has driven prices to sustained lows not seen since the early 2000s. And in both the generation and the utility distribution side of the business almost zero marginal cost renewable generation is roiling business practices built on the concept that both capital costs and variable costs could be spread across all customers in a “fair” manner determined by long-standing regulatory principles. 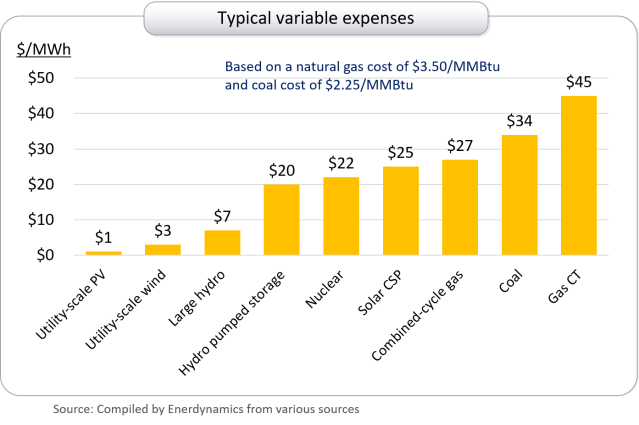 Rifkin suggests that utilities must be preparing for the Third Industrial Revolution by running two parallel business models. One focused on continuing to provide reliable service in today’s energy world primarily driven by fossil fuels, and one focused on transitioning the company to the future.  He suggests that utilities prepare for the future by setting “up partnerships with thousands and thousands of enterprises. You have to manage their energy flow on an on [sic] internet platform, helping them to mine the analytics of their big data and their energy flows.”[4]

Interestingly, this echoes the direction the State of New York is taking in the ongoing Reforming the Energy Visions (REV) proceeding where regulation will be reformed to move electric utilities to become distribution systems platforms[5]. Over time, New York envisions that utility revenues will become more and more driven by market-based earnings associated with network services. Below illustrates NY PSC’s vision for future utility earning sources. 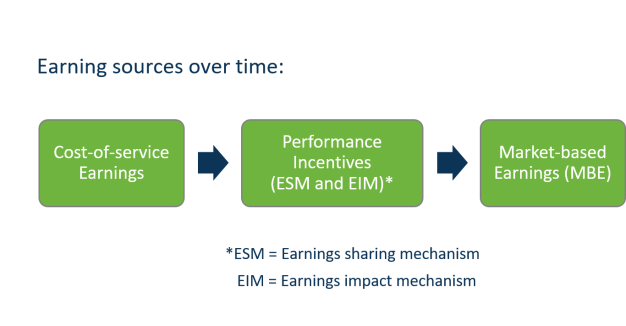 Transforming a company while also keeping the lights on in today’s world is not an easy task. Certainly some utilities will do better than others. A recent study by Lux Research[6] suggested that some of the utilities leading the way include the European utilities E.ON, Enel, Engie, and RWE plus the U.S. utilities SDG&E, Exelon, and Duke. 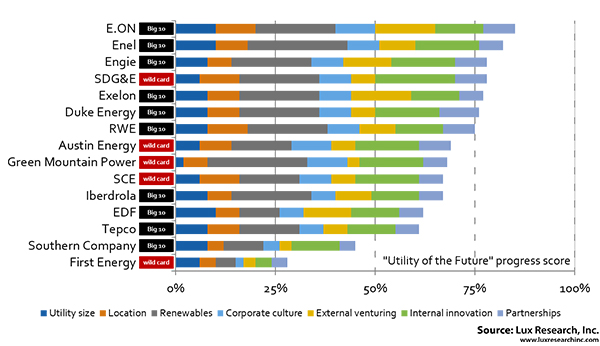 Of course, who wins and who loses in the coming new world remains to be seen. But what appears certain is that future energy companies will be as dramatically different from our traditional utilities as today’s mobile carriers are different from the Bell telephone companies of yesteryear.

[1] If you have 10 minutes, we recommend Rifkin’s video at https://www.youtube.com/watch?v=3xOK2aJ-0Js

[2] For an explanation of marginal costs, see http://www.investopedia.com/terms/m/marginalcostofproduction.asp?lgl=no-infinite

Enerdynamics was formed in 1995 to meet the growing demand for timely, dynamic and effective business training in the gas and electric industries. Our comprehensive education programs are focused on teaching you and your employees the business of energy. And because we have a firm grasp of what's happening in our industry on both a national and international scale, we can help you make sense of a world that often makes no sense at all.
View all posts by Enerdynamics →
This entry was posted in Electricity, Energy Training and tagged Electric Utilities, Utility Business, Utility business model. Bookmark the permalink.