The EPA Has Withdrawn the Clean Power Plan – So What’s Next?

Discussions in Washington on how to address greenhouse gas (GHG) emissions and climate change seem endless. In 2015, following failure of Congress to develop a legislative solution, the Environmental Protection Agency (EPA) released the Clean Power Plan (CPP) under President Obama. The plan proposed to regulate power sector GHG emissions by creating state-by-state emission limits and requiring a state to define the pathway to achieve its goals. The plan allowed each state to develop its pathway individually or through regional multi-state efforts.

Many believed that multi-state plans would evolve into a national carbon cap-and-trade mechanism. But before implementation got beyond the initial discussion phase, the U.S. Supreme Court put the plan on hold until court challenges could be addressed. During the 2016 presidential election, Donald Trump consistently opposed the plan. In October 2017, his new EPA administrator announced the plan would be repealed and the EPA would begin developing a new rule. Although this too will result in new waves of legal action, it appears the Clean Power Plan is now dead.

Despite the demise of the plan, many states, cities, and corporations moved forward with their own clean energy actions. And market conditions have helped cleaner energy sources including energy efficiency, wind and solar, and natural gas. While various factions argued about federal regulation, yearly GHG emissions from the U.S. energy sector declined by 14% in the decade between 2005 and 2015. Last year, the U.S. Energy Information Administration released an analysis suggesting power sector GHG emissions would remain steady without the CPP but would continue to fall if the CPP were implemented.

Interestingly, many energy experts now disagree with the concept that GHG emission declines will end without the regulatory force of the Clean Power Plan. Some believe the federal government is becoming increasingly less relevant in the future of energy sector developments. Utility-scale wind and solar power are now the two lowest-cost resources for new electric supply, and numerous utilities, even in states with no clean power requirements, are replacing older coal units with wind and solar. Many others are shuttering coal units and replacing them with natural gas. It appears we may lose at least half of our country’s coal power plant fleet in the next decade. 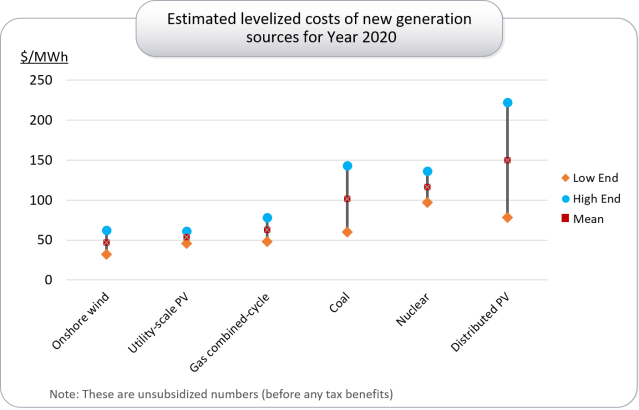 Meanwhile, corporate buyers are steadily signing purchase power agreements to directly buy renewable power and, as of 2016, corporate buyers were the largest purchasers of renewable energy in the U.S. While the EIA analysis estimates a 32% reduction in yearly GHG emissions from 2005 levels by 2030, a recent analysis by the energy consulting firm Rhodium Group estimates a 27-35% reduction by 2020 based on current trends.

Source: What the CPP Would Have Done, John Larsen and Whitney Herndon,
Rhodium Group

So while it appears we may well hit EPA’s targets without regulation, all is not rosy for those concerned with GHG emission levels. What has been lost is a government-sponsored mechanism for states to cooperatively reduce GHG. This may ultimately prove a big setback in attempts to go beyond a 30% reduction. Or, it may spawn private or multi-state programs that supersede what the federal government appears incapable of implementing.

Enerdynamics was formed in 1995 to meet the growing demand for timely, dynamic and effective business training in the gas and electric industries. Our comprehensive education programs are focused on teaching you and your employees the business of energy. And because we have a firm grasp of what's happening in our industry on both a national and international scale, we can help you make sense of a world that often makes no sense at all.
View all posts by Enerdynamics →
This entry was posted in Electricity, Renewables and tagged Clean Power Plan, electric generation, GHG. Bookmark the permalink.