When Will the U.S. Natural Gas Market Turn?

Natural gas prices in North America are closely watched by industrial corporations, electric generators, marketers, gas utilities, and now even international marketers and consumers of natural gas. These prices have remained historically low despite various factors that could work against them including the expansion of markets for U.S. gas to include exports to Mexico, exports worldwide via LNG, and gas-fired units’ dominance as an electric generation source in the U.S. Will low prices be a long-term phenomenon, or are we nearing a tipping point that will result in a rapid price increase?

“In North America, natural gas is a commodity whose price is driven by fundamentals. The value of natural gas, or price level, is determined by the perception of the supply and demand picture. Long supply, meaning suppliers are producing more supply than required by market demand, pushes prices down since buyers are able to negotiate price among multiple suppliers who need to sell for cashflow. Short supply means that production is equal to or less than demand. This results in buyers bidding up the price so they can get supply before another buyer does.”

Key fundamentals include perceptions of current and future supply/demand balances:

For future prices, additional factors include:

Gas prices have historically been volatile but seem less so now

Historically gas prices have changed quickly with large fluctuations in pricing levels. But since the emergence of consistent shale gas production early in the current decade, prices have stayed within a historically low range of $2 to $4 except during extreme winter weather events. And looking at the future price curve, it is the current expectation of the market that prices will stay in that range through 2024.

Why are prices expected to be so low?

According to the 2017 EIA Annual Energy Overview, U.S. demand for natural gas  in 2024 (including demand for exports) is expected to be 20% higher than 2016 levels: 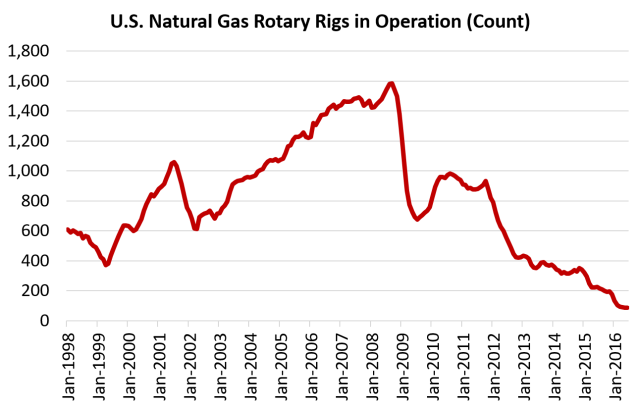 Of course what isn’t being shown here are the dramatic productivity improvements by gas exploration and production companies that translate to significantly more gas per well drilled. Indeed, while rig counts have fallen, gas production has risen:

So if rig counts and demand/export growth suggest that prices should rise, why aren’t they? Clearly the current market has a strong belief in the ability of gas producers to continue to efficiently pump out new gas supplies. Until that belief changes, we can expect continued low prices except during extreme weather conditions.

Want to learn more about gas markets? Enerdynamics offers Gas Market Dynamics as an online course or as a live seminar for groups. Call 866-765-5432 ext. 700 or email info@enerdynamics.com for more details.

Enerdynamics was formed in 1995 to meet the growing demand for timely, dynamic and effective business training in the gas and electric industries. Our comprehensive education programs are focused on teaching you and your employees the business of energy. And because we have a firm grasp of what's happening in our industry on both a national and international scale, we can help you make sense of a world that often makes no sense at all.
View all posts by Enerdynamics →
This entry was posted in Natural Gas and tagged Natural Gas Markets, Natural Gas Prices. Bookmark the permalink.