What Do Growing LNG Exports Mean for the U.S.?

In our latest blog post on LNG we explained what LNG is and how it is produced.  We then noted that LNG exports by the U.S. have grown substantially in the last year:

The growth of exports in 2016 and early 2017 are just the start. With construction of additional export capacity ongoing at six different facilities, the U.S. is poised to have the world’s third largest LNG export capacity by 2020 (following Qatar and Australia). By the end of 2019, the U.S. is expected to have capacity of 68 million tons per annum (MTPA), which is equivalent to 3.1 trillion cubic feet (Tcf) of gas. By way of comparison, the U.S. consumed about 27.5 Tcf in 2016, meaning that if the export capacity were fully used (it won’t be) demand for gas would increase by more than 10%. And a second wave of export capacity projects is expected later, perhaps after 2025.

According to EIA estimates, the U.S. will become a net exporter of natural gas next year.  Growth in LNG exports, coupled with growing pipeline exports, will flip the U.S. from its traditional role as a net importer to being a net gas exporter.

Historically, most LNG has been traded under long-term contracts tying a specific liquefaction source to a specific destination with no flexibility to redirect supplies to markets offering a better return. In the last 10 years, the percent of LNG traded in shorter-term contracts (less than 2 years in duration) has increased from about 10% to close to 30% with more contracts allowing destination flexibility.

Pricing historically has been indexed to oil prices, but in recent years there has been some movement to instead price LNG relative to gas market hub prices in the destination marketplace. Also in this time, numerous countries have added the capability to receive LNG – the number of LNG-consuming countries has grown from 17 a decade ago to 39.  The development of off-shore floating storage and regasification units (FSRU) has allowed smaller markets to join the LNG marketplace, and the number of participating countries is expected to grow.

In the next few years, large volumes of U.S. LNG will enter the market with no destination limitations and with price indexed to Henry Hub, not oil.  This likely will have significant impacts as more and more LNG is traded in spot markets with the capability to chase the highest return and potentially land at a price significantly lower than supplies indexed to oil. Two potential impacts are prices around the world converging (which we are already seeing), and the potential for natural gas to price other fuels such as coal and oil out of the market, as we have already seen in the U.S.  A secondary benefit will be cleaner energy production as natural gas displaces more polluting fuels. 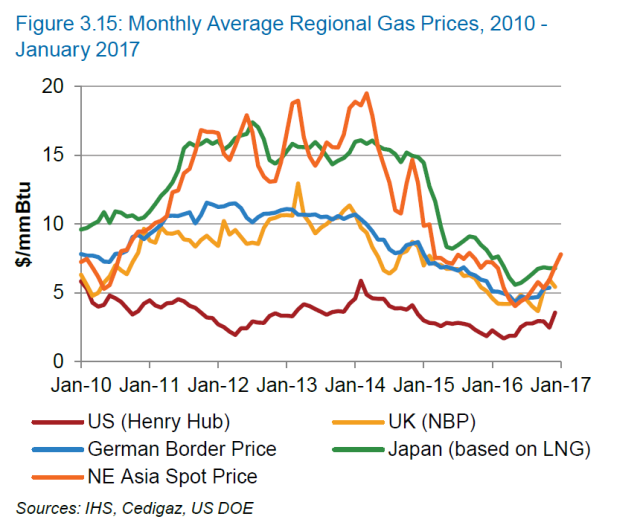 U.S. producers expect to benefit from LNG growth. New markets are now available for their supplies, and there is the possibility that export profits could be higher than sales of gas at home. Meanwhile, consumers in the U.S. may be wondering what is in it for them.  While LNG exports certainly don’t help U.S. consumers, most analysts seem to agree that they won’t hurt customers all that much either. Clearly an increase in export demand has the potential to cause prices to rise. But most observers believe that the U.S. has ample supply to cover both consumer demand and exports while keeping prices at moderate levels.

A 2015 study performed for the U.S. Department of Energy concluded that “most of any U.S. LNG exports would be made possible by increased extraction rather than the diversion of natural gas supplies.” The key is for production to continue to increase. If producers find it difficult to produce low-cost shale gas supplies due to technical, political, or environmental reasons, then our conclusions could change quickly. So as with most things associated with natural gas, it will be important to keep a watchful eye on the market fundamentals.

Enerdynamics was formed in 1995 to meet the growing demand for timely, dynamic and effective business training in the gas and electric industries. Our comprehensive education programs are focused on teaching you and your employees the business of energy. And because we have a firm grasp of what's happening in our industry on both a national and international scale, we can help you make sense of a world that often makes no sense at all.
View all posts by Enerdynamics →
This entry was posted in Natural Gas and tagged Liquefied Natural Gas, LNG, LNG Exports, Natural Gas Markets. Bookmark the permalink.