Corporate Purchasers Are As Important as Utilities in Renewables Growth

In recent years, new wind and solar electric generating capacity has outpaced all other sources of power. In 2016, the two renewables sources grew by more than 20,000 MW compared to the next largest source, natural gas, which grew by about 7,000 MW.

Much of this capacity has been built under power purchase agreements (PPAs) with utilities either because the utility needs the power to fulfill a state-mandated renewable portfolio standard or, increasingly, because renewable power has become the low-cost supply choice when the utility performs its periodic Integrated Resource Planning (IRP) process. But another key factor leading to the growth of renewables is growth of corporate end-use buyers who sign PPAs with renewable developers.

Indeed some analysts have suggested that corporate buyers have become as important as utilities. The Business Renewables Center tracks publicly announced corporate renewable deals and is showing  4,810 MW of new corporate-funded renewable capacity over the last two years. 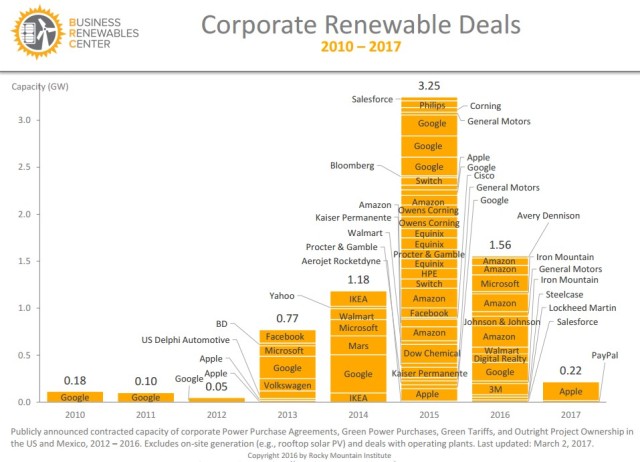 Buyers include many well-known companies including Amazon, Apple, Dow Chemical, Google, Microsoft, and Walmart. Google announced that in 2017 they expect to buy enough renewable energy to account for 100% of their usage[1], (which is about equivalent to the energy usage by the city of San Francisco!).

Why Do Corporate Buyers Sign PPAs to Buy Renewables?

Corporate buyers are signing renewable deals for two key reasons. One is that a growing number of corporations have adopted corporate sustainability goals and/or believe that buying clean power enhances their marketplace image. But in many cases, corporate buyers are committing their dollars because they believe it is the best way to lock in reasonably priced power supply over the long-term.

As quoted in a recent Utility Dive article[2], Google’s director of energy and sustainability said: “We are not doing this because it will make us feel good.  These are economic decisions that are also good for the world.”

I’ve heard similar sentiment from the corporate energy buyer for Walmart who said when he goes to the Walmart board for approval for his plans, he doesn’t even mention sustainability; he simply sells renewables deals based on what is the most economic source of energy supply for Walmart. The key is that by signing fixed-price long-term PPAs, corporations are reducing their risk of future electricity price increases.

How Does a Corporate PPA Work?

In competitive retail markets where end users are allowed to buy directly from generators, it is easy to see how a company like Google can lock in fixed power prices through a PPA since the power they buy can be directly used by their end-use facilities[3]. 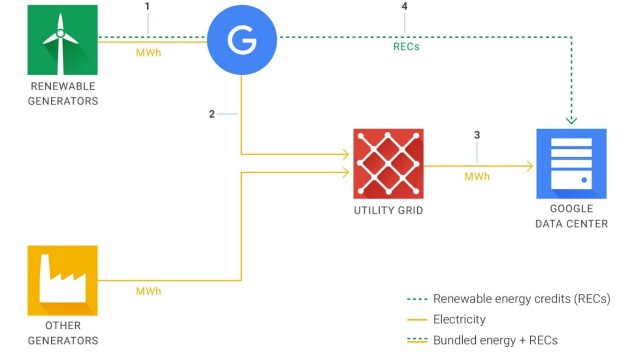 To make things work in a market where the utility is responsible for supplying power to end-use consumers is a bit more complex as demonstrated by the above graphic.

While the renewable PPA isn’t a perfect price hedge relative to the cost of utility supply, it is expected to be a reasonable hedge against utility rate movements. And Google gets one other significant benefit — the output from the renewable project does not have to match up in time with consumption by the data center since the utility grid is being used to “store” power when generation and usage doesn’t match.

What is the Future of Corporate Renewables Purchases?

The Rocky Mountain Institute estimates that over 60,000 MW of new renewables will be needed by 2025 to meet corporate clean power goals. Sixty-five key companies have created a set of Corporate Buyer’s Principles that are intended to guide utilities and regulators in setting rules that allow for ease in signing long-term PPAs.  Signatories include most of the companies already mentioned here plus other well-known companies including Target, Gap, GM, Kellogg’s, Hilton, Starbucks, and McDonald’s. By all indications, corporate support for renewable projects will continue to grow even if U.S. government policy does not support renewables.

[3] There is still an issue associated with the locational value of power if the generator is not located at the same point on the grid as the consumer, but we will explore that issue in a future blog.

[4] See  ‘Achieving Our 100% Renewable Energy Purchasing Goal and Going Beyond’ at  https://static.googleusercontent.com/media/www.google.com/en//green/pdf/achieving-100-renewable-energy-purchasing-goal.pdf

Enerdynamics was formed in 1995 to meet the growing demand for timely, dynamic and effective business training in the gas and electric industries. Our comprehensive education programs are focused on teaching you and your employees the business of energy. And because we have a firm grasp of what's happening in our industry on both a national and international scale, we can help you make sense of a world that often makes no sense at all.
View all posts by Enerdynamics →
This entry was posted in Electricity, Renewables and tagged electric generation, Power Purchase Agreement, RECs, Renewable Energy, Renewable Energy Credits. Bookmark the permalink.