Will This Generation of Utility Employees See the Last Coal Unit Close?

The City of Fort Collins Utilities, a municipal utility in northern Colorado, has a conundrum. Through its partial ownership of Platte River Power Authority (PRPA), Fort Collins Utilities gets about 75% of its electricity from coal-fired power. Not too long ago this looked like a winning proposition as PRPA owns Rawhide power plant, one of the most efficient and reliable coal units in the country.

But environmental issues are critical for the voters of Fort Collins. In March 2015, the City of Fort Collins adopted a new Climate Action Plan Framework[1] with targets to:

Given that electricity makes up 52% of the city’s GHG emissions, it is clear that the city cannot achieve its goals without ending PRPA’s existing ownership in part of the Craig power plant and all of Rawhide. According to the city, implementation of the Framework will have dramatic results:

Is this scenario representative of the future of coal units around North America? With natural gas prices hovering below $2 even in the middle of winter[2], solar and wind costs still dropping, and with developing load flexibility and storage technologies, it certainly makes it a lot easier for even skeptical utility planners and regulators to decide to shut down coal units no matter their efficiency.

Below are a few graphics that illustrate the not-so-promising future of the coal industry as we’ve known it.

Coal generation appears to have fallen below natural gas output permanently starting in mid to late 2015:

The cost of natural gas generation has fallen to equivalency with coal even with zero cost attributed to carbon output:

According to Energy Information Administration data, coal generation capacity will fall by 57 GW between 2011 and 2019:

In the last five years, coal as a new generation resource has gone from low cost to high cost relative to renewable technologies: 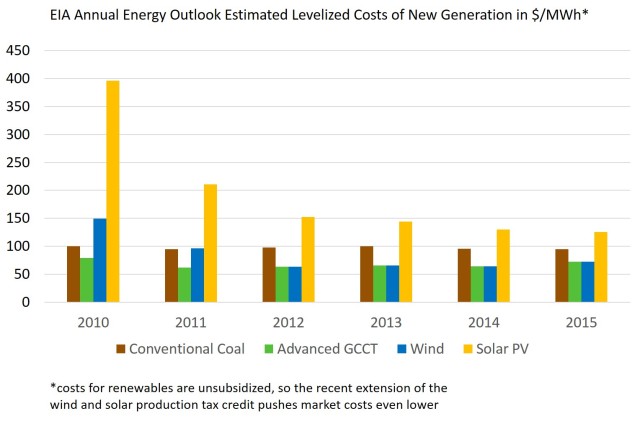 The Province of Ontario closed its last coal unit in 2014: 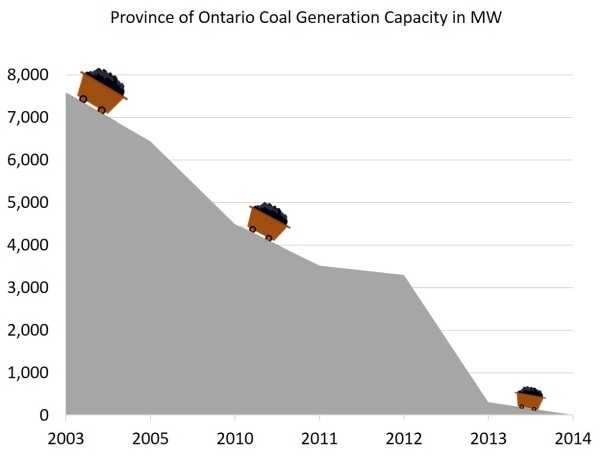 So will these trends continue? It is hard to believe they won’t absent a dramatic reversal. What could drive such a reversal? An environmental disaster so bad that the shale gas industry gets shut down; a dramatic engineering development that makes carbon capture and storage cost effective; or a complete disavowal of public concern about climate effects of greenhouse gases.  That enough of these will occur to save the coal industry appears a long shot. More likely, today’s college graduates joining the utility industry will oversee the closing of the last coal-fired generation units in North America.

Enerdynamics was formed in 1995 to meet the growing demand for timely, dynamic and effective business training in the gas and electric industries. Our comprehensive education programs are focused on teaching you and your employees the business of energy. And because we have a firm grasp of what's happening in our industry on both a national and international scale, we can help you make sense of a world that often makes no sense at all.
View all posts by Enerdynamics →
This entry was posted in Electricity and tagged Coal-fired Generation, electric generation, Electricity generation, Utilities. Bookmark the permalink.