Why Are Energy Prices Still Rising in New England?

In his inauguration speech on January 8, 2015, Massachusetts Gov. Charlie Baker said the following related to energy in his state:

“But as we begin the new year, families and businesses across New England are being hit with unprecedented increases in their energy and electric bills. At exactly the same time energy prices across the rest of the country are falling. This increase is being driven in large part by inadequate delivery systems, the result of poor planning and coordination.”[1] 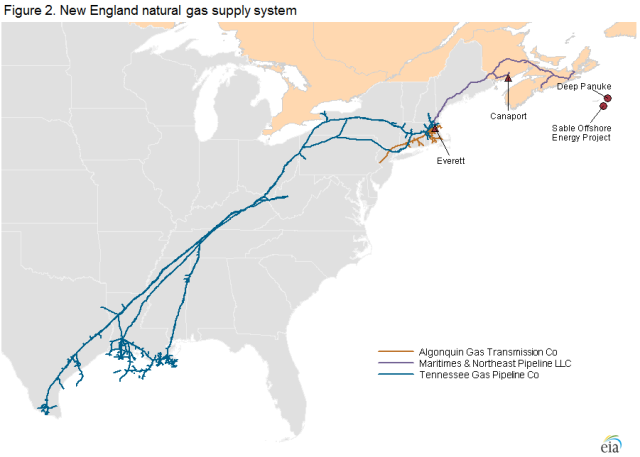 High natural gas prices in the Northeast are not new or unexpected. Algonquin City Gate prices into Boston and Transco Zone 6 New York prices are consistently among the highest in the U.S. market. In 2014, 2 Bcf/d of new capacity was added to the Northeast, but most of it was not destined to help New England. Last year’s polar vortex breakdowns that blasted the Northeast in arctic temperatures exposed New England’s extreme vulnerability as natural gas spot prices climbed as high as $78/MMBtu.[2]

A graphical display of what happens during a polar vortex breakdown is shown below, with a normal vortex on the left and one that has broken down on the right. As the Northeast struggled to cope with the unexpectedly frigid weather from the two polar vortices that struck last winter, New England’s natural gas and electricity prices soared.

The underlying problem for the New England market is fairly basic: inadequate pipeline capacity. However, the problem is compounded because it leads to price spikes during peak demand for both natural gas customers and electric generators who are increasingly depending on natural gas to fuel their power plants.

Due to geological constraints, there is no locally available gas storage that would help smooth out peak demand. New England imports LNG, however, competition for LNG is global so it is often more expensive than U.S. natural gas. While imported LNG can help ease peak demand shortages, it cannot reduce overall energy costs. The solution to this myriad of issues is complicated and involves spending money to expand the current pipeline infrastructure.

Algonquin Gas Transmission and Tennessee Gas Pipeline, the largest suppliers of natural gas to the region, have already announced plans to increase pipeline capacity by 4.1 Bcf/d by the end of 2018.[3]

The growth of natural gas-fired generation in New England only puts more pressure on the constrained gas infrastructure. When spot natural gas market prices spike, it means generators also pay more for their gas, and then end-use customers pay more for their electricity. Thus, we have circled back to the problem as outlined by the new governor: Consumers in New England are paying more for energy than those in other parts of the country. The solution to build more pipeline infrastructure may not be particularly edgy, complex, or technologically exciting, but it will lead to a solution.

Footnotes and other resources:

[3] Today in Energy: 32% of Natural Gas Pipeline Capacity into the Northeast Could be Bidirectional by 2017, December 2, 2014, U.S. Energy Information Administration

Enerdynamics was formed in 1995 to meet the growing demand for timely, dynamic and effective business training in the gas and electric industries. Our comprehensive education programs are focused on teaching you and your employees the business of energy. And because we have a firm grasp of what's happening in our industry on both a national and international scale, we can help you make sense of a world that often makes no sense at all.
View all posts by Enerdynamics →
This entry was posted in Natural Gas and tagged Natural Gas Markets, Natural Gas Pipelines, Natural Gas Prices, Natural Gas Supply and Demand. Bookmark the permalink.

1 Response to Why Are Energy Prices Still Rising in New England?