One Merchant Generator’s Plans for a “Distributed Generation-centric, Disaggregated Future”

The threat that new technologies and market evolution have on the current utility business model is very real. In a world of declining load growth driven by energy efficiency and 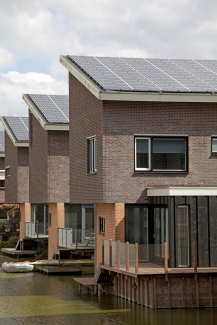 Meanwhile, it seems that merchant generators who make their money selling power from centralized fleets are even more vulnerable. After all, utilities assume consumers will need a distribution grid for some time and have some regulatory protections.

For a glimpse into how the transition to the future may go, we listened in on NRG Energy’s fourth quarter earnings call on Feb. 28, 2014.  NRG Energy, the largest merchant generator in the United States, is paradoxically increasing its fleet of central generation at the same time that CEO David Crane describes an “inexorable trend towards a distributed generation-centric, disaggregated future.”

In fact, during the call’s question-and-answer period, Crane made the statement that he believes residential solar will become cost competitive in 20-24 states within 12-24 months.  He described a hybrid solar/gas-power Stirling engine technology called the Beacon 10 that he says will create a “non-intermittent” distributed generation (DG) system to combine the best of solar power with the wide availability of the natural gas distribution grid. This differs from many other solutions that depend on large amounts of batteries to firm renewable power.

NRG provided the following chart to address how it plans to bridge the current world with Crane’s vision of the future:

Exciting change for the future? It sure seems so. But as Crane reminded everyone at the close of his remarks, success depends on NRG taking care of day-to-day business. If you can’t survive the next few years, you can’t build the future.  And taking care of business now requires successfully running a central fleet of generation.

Enerdynamics was formed in 1995 to meet the growing demand for timely, dynamic and effective business training in the gas and electric industries. Our comprehensive education programs are focused on teaching you and your employees the business of energy. And because we have a firm grasp of what's happening in our industry on both a national and international scale, we can help you make sense of a world that often makes no sense at all.
View all posts by Enerdynamics →
This entry was posted in Electricity, Renewables and tagged Distributed Energy, electric generation, Electric Utilities, Energy industry, Merchant Generator, Renewable Energy, solar energy. Bookmark the permalink.