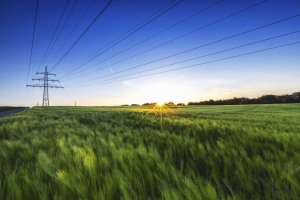 looks much less dire. Initial 8,500 MW power shortfall predictions for 2016 in MISO have been revised to be 2,000 MW. The EPA-induced retirements were not that big a deal after all.

Indeed, many Midwest states wondered exactly where the shortfall was since in their state they had a surplus. Here in Indiana, Purdue does its 20-year electricity supply and demand forecast, and it showed a 30% reserve margin this summer and 18% after that.

Indeed, the message from the Purdue study, a recent Department of Energy EIA report, and other sources is that power demands are flat or dropping in most areas of the nation.  As the Purdue study noted, such a trend has never been seen before.

Those few utilities that are short for 2016 need to enter into power purchase contracts to cover their needs beyond what they can generate themselves or have already contracted for in long-term supply agreements. Available sources in the Midwest apparently include several Exelon nuclear plants including the 1,000 MW Exelon Clinton nuclear power plant and the 2,000 MW Exelon Quad Cities nuclear power plant. The company’s CEO said plant closure is an option if the plants can’t be economically operated. Significant amounts of other uncontracted merchant generation also appears to be available.

Accordingly, state regulators should tell their utilities that before we put new steel (gas-fired or otherwise) in the ground, we need to use the power plants that we already have.  No more Kewaunees, please. Kewaunee was a merchant nuclear power plant in Wisconsin that was recently closed by its owner, Dominion, after the company said it could not economically operate the plant. This resulted in a loss of around 600 MW of electricity.

The former utility owners of the plant are both building new gas-fired generation to replace their former purchases from the nuclear power plant when already available merchant generation is sitting underutilized. A better solution may be to provide utilities with incentives to contract for purchased power going forward. Further, increased incentives for demand response and energy efficiency might also be called for to deal with any shortfall.

Energy policy makers need to consider if the current regional surplus and sharply rising rate levels (coupled with flat line demands for the next 20 years) calls for a new strategy: a slow down in new energy investments (generation and transmission) while demand absorbs the current over-supply. In short, energy officials need to focus on the fact that many Midwest states have lost their low cost electricity advantage, and this may reduce the need for ongoing construction. We need strategies to cope with this new reality.

Want to learn more about how the utility business will change as customers reduce loads and build more distributed generation? Attend Enerdynamics’ seminar Distributed Energy, Renewables and Microgrids in Chicago April 7-8, 2014. The last day of the seminar will explore new utility business models that will allow utilities to still be profitable without building new power plants.

About the author: Bill Malcolm is an energy economist based in Indianapolis. He has worked for PG&E, MISO, and ANR Pipeline. He can be reached at billmalcolm@gmail.com.

Enerdynamics was formed in 1995 to meet the growing demand for timely, dynamic and effective business training in the gas and electric industries. Our comprehensive education programs are focused on teaching you and your employees the business of energy. And because we have a firm grasp of what's happening in our industry on both a national and international scale, we can help you make sense of a world that often makes no sense at all.
View all posts by Enerdynamics →
This entry was posted in Electricity and tagged demand response, electric generation technology, Electric Utilities, Electricity, Electricity generation, Electricity Markets, Electricity Training. Bookmark the permalink.