Update on Mexico – The Next Paradigm Buster

Posted on September 13, 2013 by Enerdynamics

“Regarding petroleum and solid, liquid or gaseous hydrocarbons … neither concessions nor contracts will be granted, nor will any that have been granted persist and the Nation will carry out the exploitation of these products in the terms indicated by the respective regulatory statute,”[1]

From Article 27 of the Mexican Constitution

In our May 2013 blog titled Mexican Gas-The Next Paradigm Buster? we discussed that Mexico has long been known to have significant natural gas supplies and that Mexico 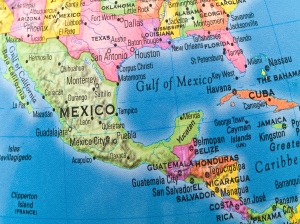 appears to have significant shale gas supplies, yet in recent years Mexico has become an increasing importer (not exporter!) of natural gas supply. One key reason for this has been provisions in the Mexican constitution that prevented private companies from participating in development of natural gas resources.  We speculated that recently elected President Enrique Peña Nieto might build a political coalition that would change this reality.

The likelihood of such a wide-sweeping change has increased with recent developments.  On Monday, Aug. 12, 2013, the Mexican government revealed a bill that would change the constitution to allow the government gas and oil company PEMEX to partner with private companies to develop new gas and oil supplies.  While private companies would still not own a share of production, they would be entitled to the cash equivalent of the oil they find and produce.

This is similar to how things work in other countries such as Ecuador, Iran, Iraq, and Malaysia.  The bill would also change the law to allow private electric generators to sell power directly to consumers, potentially increasing demand for natural gas for power generation.

To change the constitution requires a two-thirds majority in Congress and the approval of more than half of Mexico’s 32 state legislatures.  Such a major change is not yet a done deal. On the A3 blog, Sean Dunigan writes: “The ultimate test for Nieto will be the political fallout with the Mexican people. The nationalization of Mexico’s oil is commemorated as a civic holiday. It was the culmination of countless labor protests and legal battles, and held dear to many Mexicans. The ability of President Nieto to sell this idea – and to repeal a nation-defining act – to his own people may prove to the toughest in his presidential career.”[2]

The opposition, led by former Presidential candidate Andrés Manuel López Obrador is attempting to build popular opposition to the proposed bill[3]. But according to the Wall Street Journal, a protest on September 8 had a lower than expected turnout and had to move its planned route because teachers protesting other reforms refused to move to allow the energy protestors to pass[4].

Meanwhile, PEMEX has announced that it will form an entity to drill for shale gas in the U.S. to gain knowledge[5], and in May began production from its first shale gas well in the Mexican state of Coahuila[6].  We all know that in politics nothing is done until it’s done (and in some cases, it still isn’t done even when it seems to be done).  But it is looking more likely that we may see Mexico join the ranks of growing gas producers in coming years.

Enerdynamics was formed in 1995 to meet the growing demand for timely, dynamic and effective business training in the gas and electric industries. Our comprehensive education programs are focused on teaching you and your employees the business of energy. And because we have a firm grasp of what's happening in our industry on both a national and international scale, we can help you make sense of a world that often makes no sense at all.
View all posts by Enerdynamics →
This entry was posted in Natural Gas. Bookmark the permalink.

1 Response to Update on Mexico – The Next Paradigm Buster