A number of years ago, I was teaching our Electric Market Dynamics course in New York City when a developer new to the power plant business described a project he was going to finance in western New York.  He had just finished his first project in Long Island, which worked out well, and asked me: “Should I be concerned about locational marginal pricing?”  My response was emphatically YES.

For readers not already familiar with locational marginal prices, or LMP as it is more commonly called, LMP is “the marginal cost of supplying, at least cost, the next increment of electric demand at a specific location (node) on the electric power network, taking into account both supply (generation/import) bids and demand (load/export) offers and the physical aspects of the transmission system including transmission and other operational constraints.”[1]  LMPs vary hourly depending on the factors described above and can vary widely between different locations.  According to economists, they send the right price signal to generators and consumers, telling them exactly when and where power is cheap or expensive.

Of course the developer who took my class has now learned, like other generators, to study LMP intensively as the LMPs at their plant directly impact the unit’s revenues. But we still find that many consumers of electricity are in the dark about the concept of LMP and are not familiar with whether or not locational prices impact them.  Consumers that are served by utilities are usually blind to LMPs because utilities average power supply prices across their territory, so consumers in high LMP areas are charged the same price as consumers in low LMP areas.  This eliminates the benefit of sending consumers accurate price signals, but avoids having to address the historical regulatory concept of non-discriminatory treatment (one could argue, that it is not discriminatory to charge consumers a higher price in a higher LMP area since the cost of service is higher there, but politicians and regulators have not yet been willing to go down that road).

In regions with competitive retail markets, we are starting to see LMP functioning as envisioned for the consumer side of the business. An example is West Texas. West Texas has seen significant load growth in recent years with growth of oil drilling and production but has not seen significant growth in transmission or generation: 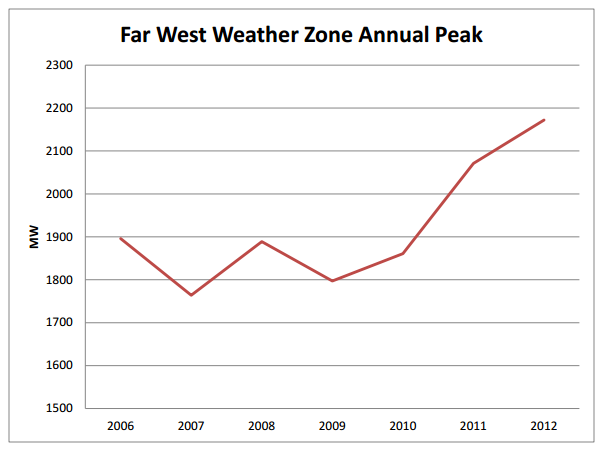 The result is rapidly escalating power prices for consumers[3] in some cases even if they had contracted for a “fixed” rate[4]. What is the result of this?  Consumer pain for sure which doesn’t sound positive.  But also rather urgent efforts to alleviate the problem including use of demand response[5] and transmission construction[6].  It will be interesting to see whether the market can indeed respond to the West Texas prices. If so, it will speak well to the benefits of transparent prices in competitive markets. If not, there will pressure to go back to regulatory solutions.

[4] How can a fixed rate increase?  Many contracts are written to pass through congestion costs to consumers even though the remainder of their rate is fixed (congestion costs are usually the main reason for large LMPs differences between regions).

Enerdynamics was formed in 1995 to meet the growing demand for timely, dynamic and effective business training in the gas and electric industries. Our comprehensive education programs are focused on teaching you and your employees the business of energy. And because we have a firm grasp of what's happening in our industry on both a national and international scale, we can help you make sense of a world that often makes no sense at all.
View all posts by Enerdynamics →
This entry was posted in Electricity and tagged Electric Utilities, Electricity generation, Electricity Markets, Electricity pricing, Electricity Training, Energy industry, Energy Training, LMP. Bookmark the permalink.