Posted on January 2, 2013 by Enerdynamics

Do a Google search for renewable power and you will find thousands of links to sites covering renewable power development in the U.S. and in Europe. But outside of China and maybe India, you 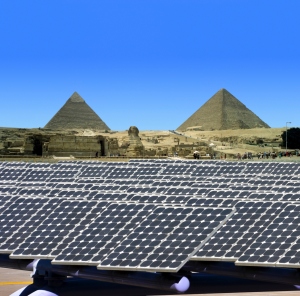 Morocco
According to a recent report on the CleanTechnica blog, Morocco has more stringent renewables goals than the State of California. Morocco plans to build 2,000 MW of wind and 2,000 MW of solar by 2020. Based on current demands and the current annual 6% growth rate of demand, this will represent about 50% of demand if completed as planned. And if you are wondering if this is just talk, Morocco put out an 850 MW wind power RFP earlier this year and successful bidders are already signing contracts [3].

United Arab Emirates
Many Middle Eastern countries have begun to realize that using their precious petroleum reserves for electricity generation may not be the best strategy. An example is the United Arab Emirates, where the emirate of Abu Dubai has set a goal to produce 7% of its electric supply from renewables 2020. But more interesting is Abu Dubai’s plans to develop Masdar City as the world’s first zero carbon community. Plans also call for making the city a global hub for renewable energy and clean technologies [4].

The Mediterranean Solar Plan and DESERTEC
In addition to renewables development focused on serving domestic electric needs, emerging economies may also find renewables development for export a fruitful area. The European Union in 2008 launched the Mediterranean Solar Plan [5] with the goal of developing 20 GW of solar power in countries such as Algeria, Egypt, Libya, Morocco, and Tunisia. Even longer-running have been the efforts of the DESERTEC Foundation dedicated to finding the best locations for developing renewables [6]. DESERTEC preaches that the world’s deserts can create solar power greater than 160 times the current world demand. Coupled with a transmission grid built to move the power to load centers, they believe the world’s energy sources could be transformed.

The future will be interesting
These are just a few examples of interesting efforts going on around the world. Will all of them come to fruition? Certainly not. But it is hard to believe that somewhere there isn’t the gist of a whole new way of thinking that will completely change the way the world looks at energy. And implementation of those ideas may not come from the U.S., Europe, or the rapidly developing Asian countries.

3. For a video on Morocco’s Renewable Energy, see: http://www.youtube.com/watch?v=bkb08POcdhs

Enerdynamics was formed in 1995 to meet the growing demand for timely, dynamic and effective business training in the gas and electric industries. Our comprehensive education programs are focused on teaching you and your employees the business of energy. And because we have a firm grasp of what's happening in our industry on both a national and international scale, we can help you make sense of a world that often makes no sense at all.
View all posts by Enerdynamics →
This entry was posted in Renewables and tagged DESERTEC, Energy Training, Renewable Energy, Renewable Generation, Renewable technology. Bookmark the permalink.