Is Renewable Power Cheaper Than Coal? 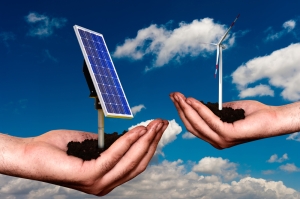 power simply can’t compete with coal power on price. It’s commonly believed that if we want clean renewable power we are going to have to pay more for it.  But that belief is now being questioned, at least for new construction. The latest Energy Information Administration (EIA) levelized cost analysis released in 2011 lists the following levelized cost for units put in service in 2016[1]:

Levelized Cost by Resource in $/MWh 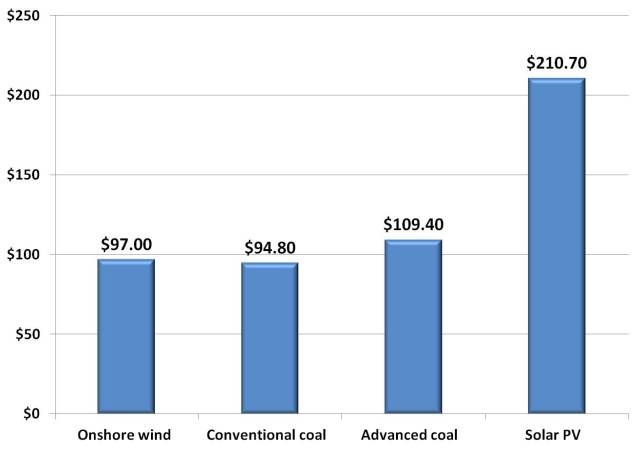 Given these numbers, wind certainly looks competitive, especially given that under current environmental regulations it would be tough to build anything but an advanced coal unit.

In a February 2012 report by the Michigan Public Service Commission (MPSC)[2], the MPSC states:  “Almost all actual renewable energy contract prices are lower than the coal guidepost rate.”  The MSPC’s estimates (based on actual contract costs for renewables) show the following:

Xcel Energy in Colorado recently signed a wind energy power purchase agreement for an initial cost of $27.50/MWh.[3] With an annual price escalator of about 2%, the price of this contract will remain well below the levelized cost of other technologies.

Now, of course we could go on to argue things like capacity value, transmission costs, or the need for backup power, and these would all be valid issues to consider.  But we can at least now say that we can’t just assume renewables are too expensive.  It is time for all market participants to consider this issue more deeply before making future plans!

[2] Report on the Implementation of the P.A. 295 Renewable Energy Standard and the Cost-Effectiveness of the Energy Standards, Michigan Public Service Commission, Feb. 15, 2012 http://www.michigan.gov/documents/mpsc/implementation_PA295_renewable_energy2-15-2012_376924_7.pdf

Enerdynamics was formed in 1995 to meet the growing demand for timely, dynamic and effective business training in the gas and electric industries. Our comprehensive education programs are focused on teaching you and your employees the business of energy. And because we have a firm grasp of what's happening in our industry on both a national and international scale, we can help you make sense of a world that often makes no sense at all.
View all posts by Enerdynamics →
This entry was posted in Electricity, Renewables and tagged Electricity Markets, Energy Education, Photovoltaic, PV, Renewable, Renewable Energy, Solar Power, Utilities. Bookmark the permalink.

2 Responses to Is Renewable Power Cheaper Than Coal?