Last week I gave a brief overview of what the EPA’s proposed Clean Power Plan is and the objectives guiding it. Now for a little more detail on the EPA’s approach toward 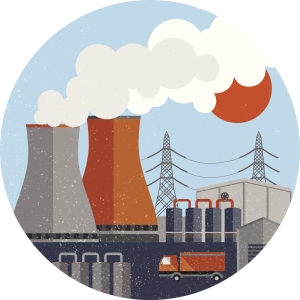 The plan’s proposed rules reflect a focused modeling exercise conducted by the EPA to:

These estimates were allocated across all states with fossil-fuel generation and result in a target goal for emissions reductions. The key analytical steps include:

The end result is a specific carbon reduction target for each state that in aggregate provides a total reduction of 30% for the country by 2030. As a result, each state has a specific target that varies greatly by state depending on various characteristics and opportunities. The application of the reductions plays out differently in each state.

For example, Michigan has a lot of coal plants and spare gas capacity so the opportunity of coal-to-gas switching is assumed as a key option in determining Michigan’s goal. By contrast, the EPA assumed that growth in wind and solar could play a relatively bigger role in helping New Hampshire and Maine cut emissions based on renewable policies that are already in place.

The EPA draft plan and associated modelling expects 2012-20 reductions to comprise 39% from combined-cycle gas turbines (CCGT) re-dispatch, 10% from heat rate improvements at coal plants, 23% from renewables, 3% from nuclear build, and 25% from energy efficiency. This will vary by state depending on a state’s fuel mix and program history.

It’s important to note that states don’t have to follow any of the above pathways and may seek approval from EPA for a unique path to achieving the designated savings goal— this is just how the EPA calculates what it deems a reasonable goal for each state. (In the proposed rules, the technical term for this is “best system of emissions reductions”. For a complete graphic depiction of the assigned targets for each state, click here.

Once the EPA sets its final targets, states will have to submit compliance plans to meet the targets. EPA’s rules reflect a purposeful attempt to provide states with extensive flexibility in meeting emission reduction targets. Compliance plans could include an array of different strategies. For example, states could:

The one condition is the need for EPA review and approval. The agency will have to decide whether a given state’s implementation plan will actually help the state meet its emissions goal. States that refuse to submit compliance plans would be subject to the EPA crafting its own plan for regulating a state’s emissions. It’s likely that any federal plan would be less flexible and possibly more costly.

Next week I’ll wrap up this series by looking at some possible holes in the plan that many feel require further clarification, and I’ll look at the implications if and when the plan comes to fruition.

Enerdynamics was formed in 1995 to meet the growing demand for timely, dynamic and effective business training in the gas and electric industries. Our comprehensive education programs are focused on teaching you and your employees the business of energy. And because we have a firm grasp of what's happening in our industry on both a national and international scale, we can help you make sense of a world that often makes no sense at all.
View all posts by Enerdynamics →
This entry was posted in Electricity, Renewables and tagged Carbon Emissions, Electricity generation, Energy Regulation, EPA, Greenhouse gas. Bookmark the permalink.